The Role of Oxidative Stress, Adhesion Molecules and Antioxidants in Preeclampsia


Oxidative stress is a consequence of reduction in the antioxidant capacity and excessive production of reactive oxygen and nitrogen species (ROS). Oxidative agents, which are overproduced due to ischemic-reperfusion injury in the placenta, may overwhelm the normal antioxidant activity. This imbalance is a key feature in the pathogenesis of preeclampsia. A decrease in glutathione peroxidase (GPX) activity is associated with the synthesis of vasoconstrictive eicosanoids such as F2-isoprostanes and thromboxane, which are known to be upregulated in preeclampsia. Biochemical markers of lipid peroxidation, such as malondialdehyde and F2-isoprostane in the placenta, are also increased. Adhesion molecules participate in the pathophysiology of preeclampsia by contributing to a reduced invasion by the trophoblast and increased vascular endothelial damage. Superoxide dismutase (SOD), catalase (CAT) and GPX play important roles counteracting oxidative stress. Other antioxidant factors participate in the etiology of preeclampsia. Levels of antioxidants such as Lycopene, Coenzyme 10, as well as some vitamins, are reduced in preeclamptic gestations. 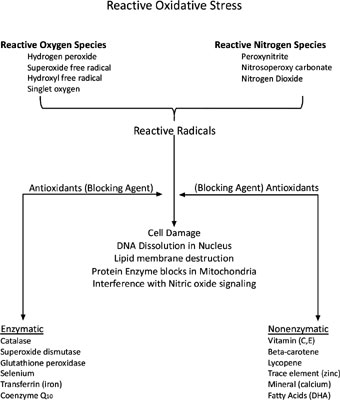