Cell-Free Fetal DNA: A Novel Biomarker for Early Prediction of Pre-eclampsia and Other Obstetric Complications


Hypertensive disorder of pregnancy, especially Pre-eclampsia is one of the major causes of increased maternal and perinatal morbidity and mortality all over the world. Early prediction of pre-eclampsia is the need of modern obstetrics, as this can timely prevent the progress of disease as well as related fetal and maternal morbidity and mortality. In addition to the screening of fetal aneuploidies, Rhesus-D status, fetal sex, single gene disorders, the cell-free fetal Deoxyribonucleic acid (DNA) quantification has emerged as a promising biomarker for the prediction of pre-eclampsia. Hence, its use can help in the early prediction of hypertensive disorders of pregnancy, especially pre-eclampsia even before the appearance of symptoms. Furthermore, in future, it can also help in the determination of the complete DNA sequence of every gene of the fetus. The present review focuses on recent literature concerning the use of cell-free fetal DNA in early prediction of preeclampsia as well as for non-invasive prenatal genetic screening of fetus for various disorders. 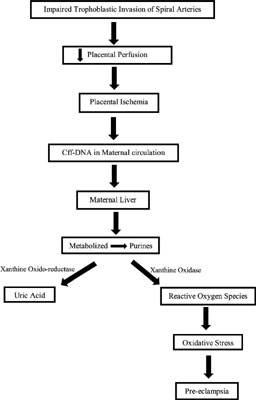