The Nutritional Characteristics of the Hypotensive WASHOKU-modified DASH Diet: A Sub-analysis of the DASH-JUMP Study

Methods: Participants were treated with the DASH-JUMP diet for 2 months. Then, for 4 months after the intervention, they consumed their usual diets. We conducted a nutritional survey using the FFQg nutrient questionnaire at baseline and after 1, 2, 3, and 6 months. We received completed questionnaires from 55 participants (28 men and 27 women; mean age 54.2 ± 8.0 years) and analyzed them.

Results: The DASH-JUMP diet is rich in green-yellow vegetables, seaweed, milk, and mushrooms, while it has low contents of meat, eggs, confectionery, oils and fats, pickles, shellfish boiled in sweetened soy sauce, and fruits. Nutrients significantly associated with the observed change in systolic BP were niacin (P = 0.005) and carbohydrate (P = 0.033). The results of the FFQg questionnaire revealed that participants who had an increased BP at 1 month after ceasing the intervention had eating habits that broadly imitated the DASH-JUMP diet at 4 months after ceasing the intervention. Therefore, the systolic and diastolic BP values at 4 months after ceasing the intervention decreased significantly compared to those at baseline.

Conclusion: The DASH-JUMP diet may represent a new lifestyle medicine for reducing hypertension. 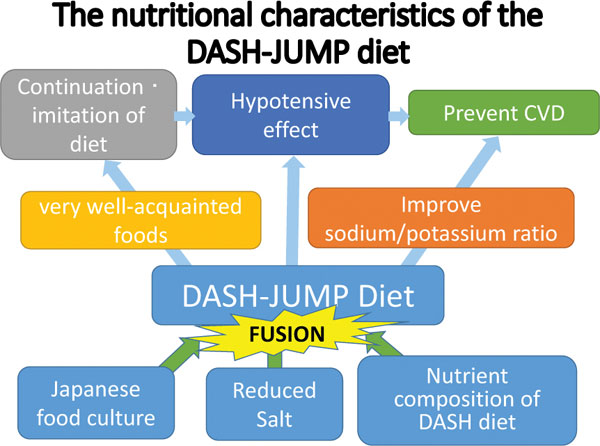